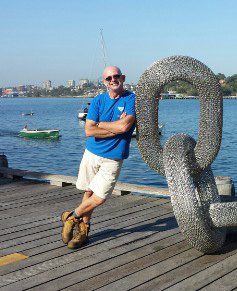 Specialising in stainless steel sculpture, Mike Van Dam uses the medium of chain links to create unique and aesthetically beautiful sculptures that he has developed and sold around the world.

The material, the chain he uses for his Sculptures is 4mm and 6mm 316 marine grade stainless steel. Once the links are welded together the structure becomes strong and durable, ideal for the coastal, commercial, public environment and luxury homes, hotels and yachts.

This high quality material he selected after intense research for all his artworks, he can easily manipulate when it comes to changing size or shape and it is a material that will literally last for hundreds of years.

Michael Van Dam is an expert in Metal, due to his Sheet Metal worker by trade profession, specialized in Stainless Steel, and passionate by Contemporary Art and Sculptures since almost ten years.

In 2013 Van Dam entered his first Sculpture exhibition in Australia. The Swell Sculpture Festival is held every year on the Gold Coast at Currumbin Beach. Van Dam’s piece titled ‘Degrees of Separation’, a Five Link Sculpture – ‘For every Action there is a Chain Reaction’ – and won the Emerging Artist award and the Artist Peer award.

He also exposed at the Swell Sculpture Art Festival in 2014 with a piece titled ‘Intervention’ where he won the Max Fabre Environmental Awareness award. In 2014 Van Dam also exhibited in Sculpture at Sawmillers and Sculpture By The Sea, both in Sydney, and started first collaborations with Art Galleries in Sydney, increased his visibility through expositions at the International Airport Queensland, Gold Coast,  ‘ The Hatchler – a Turtle’ -, Dolphins at Sydney Harbor and further locations around Australia.

In 2015 he was invited again to expose at the Swell Sculpture festival and entered ‘Emerging Dragon’ – a large Chinese Dragon, a 3, 50 m high Sculpture – 4000m of chain, and was awarded both Kids and People’s Choice award.

In 2015 Van Dam started corporate work and was commissioned for three pieces for Hayman islands Luxury ‘One and Only’ resort, Australia.

2015 Van Dam was accepted for the Art Exposition ‘Sculpture by the Sea’ 2015, held in Sydney, with the large chain links. This piece was bought directly by a private collector from Melbourne, Australia.

In December 2015, Van Dam started his international exposure, commenced the design and fabrication of three pieces destined for Rarity Gallery in Mykonos, Greece. This is Van Dam’s first international and solo exhibition, where two of the three pieces sold pre-exhibition directly !

In 2015, the Artwork he exhibited at “Sculpture By The Sea” titled “Intervention” a beautiful whale protected by a giant hand, is currently leased and exposed by the Frankston city council in Melbourne, Australia.

2016, a year of major creation of Artworks, he chose to expose at the Swell Sculpture Art Festival a set of three different Face masks titled “Life is a Masquerade”. The impact of his creations were reflected through TV interviews as well as press interviews highlighting his Masks, artwork and message.

In 2017, he exhibited in the Swell Sculpture Art Festival at Australians Beach with a large pair of 3,50m high hands titled “These Hands” and was awarded “Artist Peer” award (voted by the other artists) which additionally opened him doors to another International Audience: he was invited to exhibit “These Hands” at the exclusive XI FIP World Polo Championships Sydney and was awarded First Prize in their ART exhibition. Eight worlds best Polo Teams from the US, Chile, Argentina, England, Spain, India, New Zealand and Australia did attend this exclusive Event at the Sydney Polo Club end of October 2017.