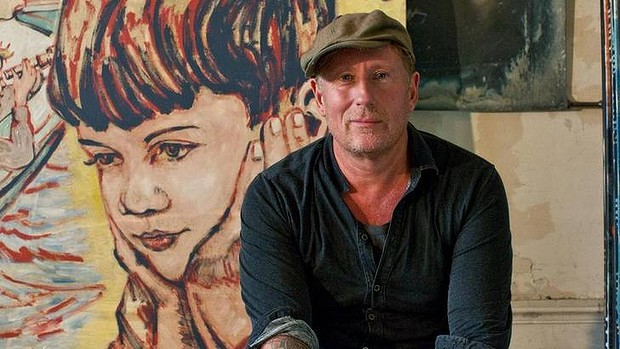 Primarily a figurative painter, David Bromley explores two distinct themes – Images of children and the female nude. His youthful explorations can be traced to 1950’s children’s book illustrations. These works pointedly explore the innocence of youth and the adventure, exploration and imagination. David Bromley infuses these colourful works with a painterly style and unexpected metallic backdrops in gold and silver leaf. An avid collector of vintage objects, Bromley’s studio is a treasure trove of inspiration for the nostalgic imagery he employs.

David Bromley’s admiration for Pop Art has played a significant role in shaping his work. He credits Warhol as an early influence demonstrated in his reductive colours, graphic style and the simplified forms of his nudes. His stunning nudes are often accompanied by floating flowers or butterflies alluding to fertility and beauty. In an unconventional gesture, Bromley rolls stripes of paint through the figures – infusing an unexpected abstract layer to these intriguing forms.

Over the past 20 years David Bromley’s work has fostered widespread acclaim and notoriety in Australia and Internationally. He has exhibited on nearly every continent including Asia, Europe, Africa and America.
website: www.davidbromley.com.au