Marble sculpture is the art of creating three-dimensional sculpture forms from marble. Sculpture is considered among the oldest of the arts. It is said that even before painting cave walls, early humans fashioned shapes from stone. From these beginnings, artefacts have developed to their current complexity.

Marble is a metamorphic rock derived from limestone. Marble is composed mostly of calcite (a crystalline form of calcium carbonate). The original source of the parent limestone is the seabed. This is a deposition of calcium carbonate in the form of microscopic animal skeletons or similar materials. Marble is formed when the limestone is transformed by heat and pressure after other materials have overlain it.

Marble is probably the most popular material used in sculpture. Marble’s translucency and durability has made it the medium of choice for all the greatest sculptors, including Greek artists like Phidias, Myron, Polykleitos, and Praxiteles, as well as their successors Donatello, Michelangelo, Bernini, Canova, and Rodin. Marble has been used for relief sculpture and friezes. Since the invention of metal tools during the Bronze Age, marble stone has been highly prized by sculptors and architects alike to create marble sculpture art. During the Renaissance, the famous artist, Michelangelo (1475-1564) described marble sculpture as the slow release of a form as it emerged out of the block. He claimed that it was his role as an artist to liberate the human form trapped inside the block by gradually chipping away at the tough stone surface. Famous examples of marble sculpture include masterpieces like the Parthenon Reliefs (446-430 BCE), The Apollo Belvedere (330 BCE), Venus de Milo (100 BCE), Trajan’s Column reliefs (113 CE), David by Michelangelo (1501-4).

Sculptors like marble. It is relatively soft and easy to work when first quarried and then becomes extremely hard and dense with age. Marble is also available in a variety of shades and patterns. White marbles are especially prized for fine art marble sculpture because of their relative isotropy and homogeneity, and resistance to shattering. Marble can also be highly polished, making it ideal for decorative marble sculpture artwork. Compared to the next best alternative stone being limestone, marble possesses a much finer grain. This makes it much easier for the sculptor to render minute detail. Marble is also more weather resistant.

Call us now for an appointment on 1300 278 347.  If you have any questions about marble sculpture art, our Sculptura team are experts and would love to hear from you.

Our extensive range includes sculpture by world-renowned artists and pieces that vary in size, style and investment value. We offer sculptures  in various materials including: 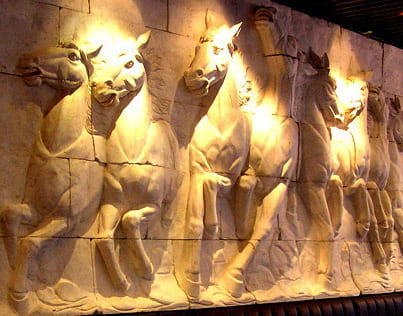 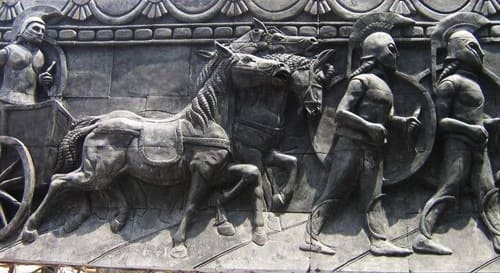