Christian Maas has been focusing on sculpture since 1987. His monumental works can be seen in public spaces in France but also abroad. He often strives to achieve a sense of realism, both in his representations of animals and the female form. Christian Maas is a very committed artist who is only too happy to put his talent to the service of a worthy social or environmental cause, as he did with the Toreshima series dedicated to birds affected by oil-spill disasters, shown in Monaco’s Oceanographic Museum. The artist has his own foundry which gives him control of the whole artistic process.

How did you get into the art world?
I have always been immersed in the art world. I was brought up on a farm and was already making sculptures as a toddler. With my grandmother from the age of about four I used to root around in the rubbish and make stuff out of the objects I found. After that it was chance encounters that propelled me into the work I do now. 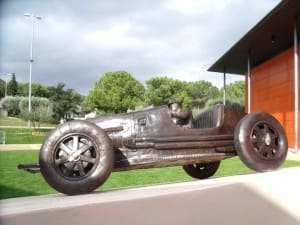 What have been the milestones in your development as an artist?
My work really evolved when I started winning competitions. I entered an international contest in 1997 and won first prize. That really was a trigger. They said it was a coincidence so I entered many more competitions and each time won first prize. Regards my style, I have periods. I also work on animal sculptures, the female body and furniture.

What is your view of art?
For me art is a game. A game of the first person (oneself) which allows you to break the rules in order to create your own rules and world, always with this pretention of matching your individuality with the universe.

What or who are your main artistic influences?
I have always been drawn to form. I am particularly fond of the animal world and the female universe – I revisit ancient myths by sculpting female forms wearing clothes from our time, thereby creating new symbols which become reference points for our society. The universe of my sculptures is not a secondary artificiality but a reality which strives to immerse us in an alternative world, and distance us from banality and violence.

What is your technique?
In sculpture everyone has their own technique. There is a lot of improvisation. Building a car does not require the same technique as shaping an animal. I spend 15 to 16 hours a day in my studio and work in a state of complete innocence. For me spontaneity is the first criteria for a work that is going to move people and will last. There are times when I have 15 pieces on the go. I am always ahead with my works because I take notes. The minute I want to start a new piece I get out my notes and choose the work that inspires me the most at that moment. My pieces are like bolts of enthusiasm, impromptu visual musings – direct visual art thoughts. Like a surgeon, I meticulously dissect my subjects, breaking them down to understand how best to recreate them. I know very well that there will be pieces I will not have time to complete.

Your sculptures are often imposing. Do you prefer the large format?
I love the big format – it’s spectacular! I find it more interesting. I have gone so far as to produce a piece that is 12 metres high. A sculpture of this size is made using scaffolding like they do with buildings. And to be honest, there is less competition in the big format sculptures. I do everything in my studio from the first mouldings to the casting. That’s why my prices are so competitive!

What role does chance play in your works?
Most of the time, I know what I want to do. But sometimes I start a sculpture and during the process change it as I did with the Grace Jones sculpture. However I still start out with a detailed plan of it in my head.

You recently opened an art gallery with the dancer and choreographer Ramon Reis. How did this come about?
It was Ramon’s idea to open the gallery in Monaco. Initially there was no question of me being part of the project but on the phone we talked about a name for the gallery and it all happened quite naturally. I am happy as I have always had close ties with Monaco. I have several sculptures on show here, notably the McLaren Formula 1 car at Port Hercule and pieces in the Oceanographic Museum.

Can you tell us about any of your future projects?
Actually I am thinking about a sculpture of Ramon dancing. I have also just completed, among others, a sculpture of a female nude balanced on high heel shoes, in bronze. She will be coming soon to the gallery in Monaco.

See the profile of Christian Mass