COLOURFUL Geelong Mayor Darryn Lyons is courting controversy after handing over part of his private — and provocative — art collection to the city’s gallery for a summer exhibition.

The former paparazzi king has been a serious art collector for 20 years and his extensive collection includes eight Andy Warhol paintings.

Lyons has loaned 32 works — including a detailed life-size sculpture of a naked woman bending over — to the Geelong Gallery for its centrepiece exhibition Lyons’ view — the Mayor’s choice.

“There are some very controversial pieces, but I love the female form and I don’t look at it as controversial at all. It’s been painted since Adam and Eve,” he said.

“The only decent picture I’ve ever seen of the male form was Rudolf Nureyev in his prime, which was a famous piece that I can’t afford to buy yet, but intend to.” 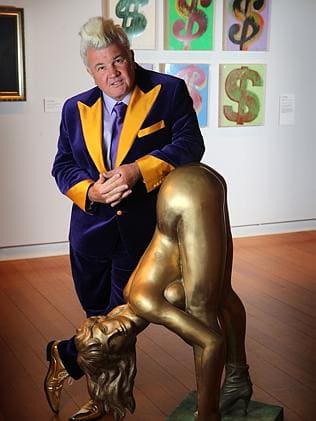 hol was “better than sex”.

He put that painting of a dollar sign on lay-by, walked around the block and decided he would “beg, borrow or steal” to buy the set of six.

“It was just the sexiest and coolest thing I’ve seen. Andy Warhol is still possibly today, and will be forever, one of the coolest artists in the world.”

Lyons won’t reveal the dollar value of his collection, though it could be well into the millions, and is unsure how many pieces he owns. “I don’t think if you’re a collector you ever count, you just appreciate,” he said. He guesses he has about 130 original paintings, photos and sculptures from artists including Sir Peter Blake (“the original pop artist”) and Stuart Semple (“I’m backing him as the next Warhol-esque”).

One of his favourites is the bronze sculpture of the naked woman, Bending nude (2004) by Christian Maas.

“As soon as I saw it I had to have it. It was just perfection to me,” Lyons said, though his mother is less impressed.

This year, for the first time, Lyons was painted for the Archibald Prize by Geelong-raised skull artist Terry Taylor, who has a huge following in Europe.

Lyons is happy to be sharing some of his most treasured possessions with his beloved city and, typically, has a much bigger goal in mind. He has begun lobbying the Prime Minister for support to build a national photographic gallery in Geelong. “Arts and culture are a passion of mine. I personally have the best photographic collection, historically, in Australia. I challenge anyone to have a better collection,” he said. “I want to have another gallery down here that is strictly photographic.

In the meantime, Geelong Gallery director Geoffrey Edwards is happy to have Lyons as a drawcard and is comfortable with the mayor’s flamboyant nature coming through in the exhibition.

It has also been curated to include Lyons’ favourite pieces from the gallery’s permanent collection, such as Frederick McCubbin’s A bush burial and Eugene von Guerard’s View of Geelong.

“There are some controversial works, but art is about promoting ideas and provoking conversation so that is good too,” Edwards said.

“The mayor is such a maverick figure in Geelong and in Victoria. How many mayors around the land collect art? So what an opportunity for the gallery to work with the mayor, very happily and closely, on the selection.”